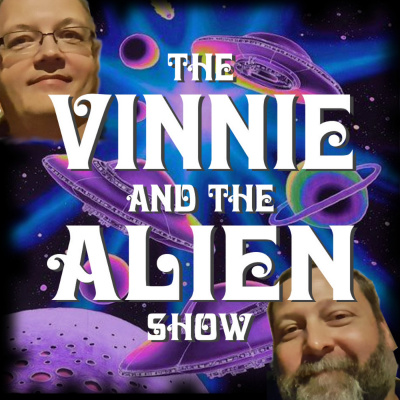 Vinnie And The Alien

Traveling at redunculous speeds through the galaxy, your hosts MotownVinnie and Alienstone bring you two hours of hilariously bizarre news stories, funny skits and segments and lots more! Segments include The Punchlines with Alienstone, a fun interactive game show called "Onion Or Potato," Shower Thoughts, Totally Absurd Facts and even a little indie rock thrown in just to give your sides a chance to stop aching for a bit. Just remember, resistance is futile and probling is not allowed on the Mothership!MotownVinnie and Alienstone have a great radio chemistry together, and they really know how to make their audience feel welcome and interact with them via their chatroom at alienxradio.com and by listeners calling in to the show at 313-444-8919. They also sometimes do live interviews, live performances in the studio and a whole lot more. Listen live at their new time Sunday afternoons at 12 noon at alienxradio.com, with TuneIn, RadioFM or the Alien X Radio android app! You can also listen on their many affiliate stations in the US, Canada and Europe. Find them on Facebook or visit vinnieandthealien.com for more info.This show has ended as of January 21, 2018. Alienstone is still doing a show in the same time slot called "Inside The Mothership."